I spent the whole afternoon trying to make the arduino works with 2 dataflash chips. A coupe of really stupid code mistakes and some weird stuffs later, it worked. You can now have 2 instances of ATD45DB161D class. For example one will use the pins 2, 4 and 5 for SS, RESET and WP and the other one will use pins 10,8 and 7.
I couldn’t make SS work with an other pin than the pin 10 until I ran across forum post. So I have to set both the requested SS pin and pin 10 (hardwired SS pin) high before setting the SPCR register so that the atmega168 becomes master.
So I moved the SPCR initialization to a new method astutely called Enable. And I added its counterpart called Disable which drives the SS pin high.
So before using a given Dataflash chip, you’ll have to call Enable before using it. And call Disable when you are done with it.

You can find it [here].
Any ideas/suggestions for a cleaner/safer way to handle multiple SPI device are welcome 🙂 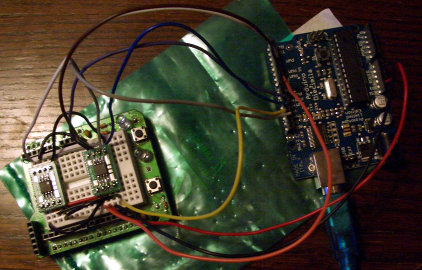 [edit]: Arg, I should have checked Atmel site. They have an application note called AVR151: Setup And Use of The SPI.
[edit] (it’s the last one. I swear 🙂 ) I moved the SPI master init into a new function (spi_init). It’s a little bit cleaner now. But it’ll stay in a branch until I run more tests and have some feedback.

Some of the stuffs I posted here are now on [GitHub]. Namely, the [arduino dataflash library] and the [ips patcher]. Feel free to clone them 🙂
I’m taking a little break from OpenGL stuffs and the pcengine tracker. To relax I’m working on Marchen Maze translation. I’m nearly done with the introduction. I’m currently working on the insertion software. But I need to find someone to translate the script… Anyway you can check my progress on [pcedev].

And for more useless stuffs you can check my [twitter page]. 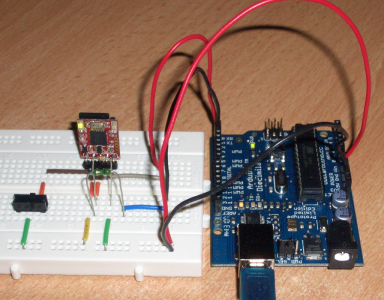 I just got my hands on a 20×4 serial LCD from Sparkfun. It’s basically a standard LCD with a little PIC based serial TTL interface board plugged on it.

10 lines of code and 3 wires later, I had a wonderful “Hello world” displayed on screen. The only problem is that I was using pin 1 (TX) which is shared with the serial USB interface. So when the sketch is uploaded, it’s also sent to the SerLCD. And you end up with garbage on screen. Hopefully, Arduino comes with a soft serial class. It lets you use custom pins for serial communication. The only downside it that it can only run at 4800 baud or 9600 baud.
Next serial fun : 4DSystem’s µDRIVE-uSD-G1.

The mandatory piece of code. 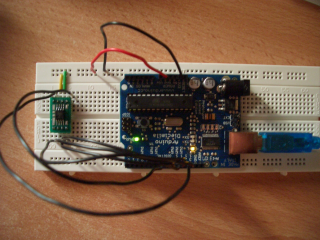 As I managed to make the Arduino software work under linux, I did this week Make weekend project : “Intro to the Arduino”.

It’s really simple. When you push a button connected to pin 2, a led connected on pin 9 will fade in and out.
Easy isn’t it? Unfortunately I’m pretty bad in electronic. My first try made the led blink nervously. After several unsuccessful attempts, I decided to make things work step by step.

Ten minutes later it was finally working! Here’s a totally wonderful and awesome video (edited with Avidemux) to prove it 🙂

Months ago, I bought an Arduino. It comes with a nice ide but I always used it under Windows. This summer I decided to stop using Windows and I haven’t played with the Arduino since then.

Some days ago I purchased some stuffs from Sparkfun (some dataflash, resistors, etc…) in order to make some kind of backup device for the pc-engine. So I decided to install the Arduino softwares on my box. I’m currently running a Fedora core 7 for amd64. There are instructions for Fedora core 6 on Arduino site. But as I’m running on an amd64 I had to recompile some stuffs.