Harry Dumper and the order of the Griffin

The Magic Griffin is a game copier. From the menu and the case, it seems to have been made by a taiwanese company called Front Fareast and JSI.
I don’t know if the Front Fareast listed on wikipedia is the same [link]. And I’ve found nothing about JSI.
About the hardware. You plug it in the Hucard slot and the joypad port. Oh I forgot, you can only use it on a PC Engine/CoreGrafx. On the front you have a standard Hucard slot and 2 joypad ports. Only the right one is working. I don’t know what’s the left one is used for. There are 2 parallel ports on the right. One for an external floppy disk drive and another one labeled COM port. I only tested the floppy disk. 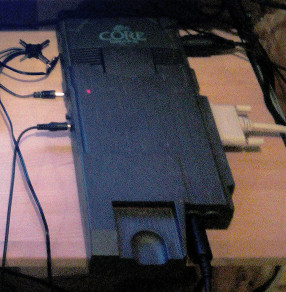 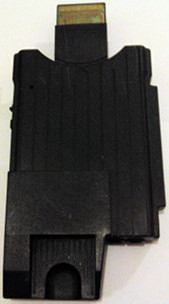 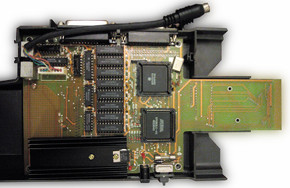 An Altera chip, a Motorola chip, some RAM, some TTL chips and a UV EEPROM (on the onther side). I haven’t identified the chips yet.
So what happens when you power it on? Well you see this: 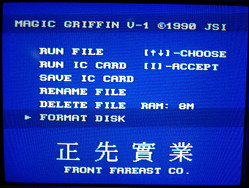 It may work like the other flash cards (TotoTek PCE Pro, Krizz Everdrive). This means that it acts like a standard Hucard. But some special addresses are used to communicate with the special hardware. For example the Everdrive can access the SD card via some addressess that are mapped to the SPI registers. I pretty sure the code is hosted on the UV EEPROM.
About the menu.

RUN FILE: Run a file from the floppy disk. 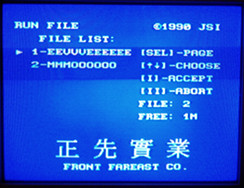 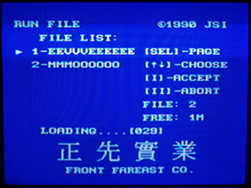 RUN IC CARD: Run the Hucard.
Unfortunately I was unable to run any card. It either tells me that there’s no Hucard or it will freeze. This surely comes from oxidized card connector.

SAVE IC CARD: Save Hucard to floppy disk.
It’s the menu that would have sent you to jail in the 90’s 😀 You name the file, press I and it will start dumping the Hucard on the floppy disk. Unfortunately the controls are awful. Pressing RUN will spit a whole lot of chars. Same for SEL, it’s more likely that it’ll delete the whole filename. You can’t write a single char. So you’ll end up with filenames like ‘ssssooooolll’ or ‘bbbbooommbbb’ 🙂
As I said before I was unable to run any Hucard. Despite the fact that it seems to have dump the game, I was unable to run any of the game I’ve dumped. I’ll check the dumped files as soon as I get my hands on an USB Floppy drive. But I’m pretty sure I’ll have a bunch of 0xff. 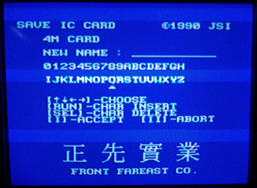 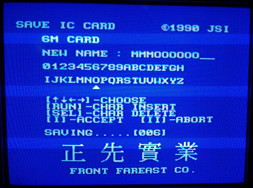 RENAME FILE: Rename one of the file on the floppy disk.

DELETE FILE: Delete a file from the floppy disk. 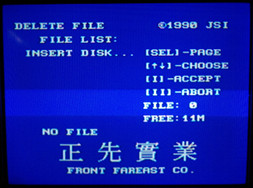 FORMAT DISK: Format floppy disk.
You can either format a HD (1.44M) or DD (720K) floppy drive. Be carefull, it’ll start formatting the disk once you enter the menu. 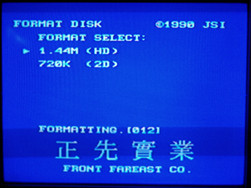 That’s all.
I’ll try to clean/fix the connector. And once I receive the USB floppy drive I’ll check the dumped files and verify which filesystem the disk was formatted.
The coolest stuff will be to dump the UV EEPROM. So if someone knows how to safely read it, I’ll be more than pleased to hear it.

Note: This was originally posted on the PC-Engine dev forum [here].