Last day i was reading the wikipedia article about the Pioneer program. I don’t know how, but after following some links i ended on the Hayabusa mission article.
The Hayabusa space probe was launch in 2003 to study the Itokawa asteroid. The most ambitious part of the mission was about landing on the astoreid to collect samples. From what i understood, the samples would not have been collected by drilling the asteroid but from the debris made by the collision between the asteroid and a projectile launched from the space probe. Unfortunately, the attempts to land on the asteroid failed. Nevertheless, it seems that the Hayabusa managed to collect some samples.
The Hayabusa may be bak to earth around 2010.

Using the data collected, Robert Gaskell from the Planetary Science Institute generated 3D models of the Itokawa asteroid. The model is available in 3 formats (plate-vertex table, STL ASCII and triangle) and in 4 resolutions (from 49,152 to 3,145,728 triangles).
The plate-vertex table format is similar to ply2 format. So, i took the 3M triangles version. Translated it into ply2 and launched my crappy raytracer on it.
I was surprised by the rendering speed. A 256×256 image was rendered in less than 1 minute. Nevertheless, i had a nasty bug 🙁

As you may have noticed there’s a bug on the left part. Here’s a close up.

The “correct” image was obtained after 3 hours of computation by disabling BVH. So the problem came from the BVH code. After almost rewriting the BVH building and intersection code, i still had the same bug. Some heavy code review later, i realized that the wrong ray intersection was returned. In fact it was the informations of the last intersection instead of the one from the closest intersection point. It’s a very stupid bug. Well at least i cleaned up the BVH code.
So for your pleasure here is a nice 512×512 image of the Itokawa asteroid.

As i said before, the code is greatly unoptimized but it manages to render a 3M triangles model in less than one minute. I’ll try to speed up the BVH building code, use a clever cost function and monitor memory usage (while running the top command, i noticed that more than 70% of the RAM (1go) was used.)

Bonus : dark side of the patatoid! 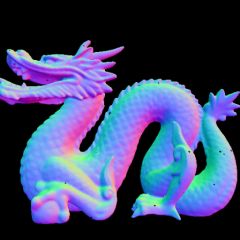 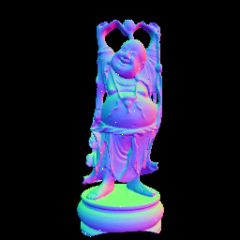 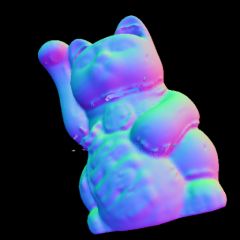